South Tottenham station will be closed again for over a month from this Sunday.

There will be no service on the entire length of the Gospel Oak and Barking Line (GOBLIN) from Sunday 17 September to Sunday 22 October 2017. The closure is to continue electrification of the line that was originally slated to be complete last February. The work has been beset by problems and looks like it may take a while to finish. According to the latest newsletter from the ever-informative Barking – Gospel Oak Rail User Group:

“Once the cables are energised and tested, electric trains will be able to start using the line.

More closures ahead … but new, clean and bigger trains should be running by next Spring

Replacement buses will run, but once again these will only cover sections of the line. One bus will run Gospel Oak –  Seven Sisters (for South Tottenham) while another will cover Walthamstow Central – Barking. Those wishing to travel between South Tottenham and Walthamstow will need to rely on the Victoria Line. TfL promise “regular users” of the line will be automatically refunded the extra cost of zone 1 travel made by Tube or rail

The electrification of our line is long overdue and this blog joined to campaign to make GOBLIN electrification happen. Once complete, it will double the current passenger capacity on the line and improve near-by air quality.

Another weekday full closure of the line (but hopefully the last!)  is expected between Saturday 25 November 2017 and Sunday 14 January 2018, although these dates are still subject to confirmation

The results of the Autumn 2015 consultation on Crossrail 2 have been published this week.

This new railway connecting London north-east to south-west could bring huge benefits to the local area as well as the wider metropolis. It will improve journey times across London, and ease congestion on the Victoria line.

However some concerns had been raised of the impact of the line – and its construction – locally.

Of particular local interest is the plan to build a tunnel portal just south of Tottenham Hale. Around half of the 321 comments made with specific regard to building this tunnel entrance are classified as positive, including the comment that it would be “hugely beneficial”.

The report reflects a widespread support for Crossrail 2 at Seven Sisters. Over three quarters of the 770 responses were “supportive”. Many felt this station development at Seven Sisters would support local regeneration (section 3.96) and would ease pressure on the Victoria line (section 3.94).

Down the road in Stoke Newington opinion is more split on the proposals to demolish Morrisons and built a ventilation shaft (Table 3.15). Some raised suggestions that Stoke Newington have its own station instead, but this may well be unlikely to be added to plans at this stage.

We shall find out as plans develop. Following George Osborne’s confirmation of development funding for Crossrail 2, things should really get moving. The “Crossrail 2 team” promise, “In the summer we will publish a document that will respond to the issues and concerns raised during the consultation. Over the coming months we will undertake further design and development work and share proposals in further rounds of consultation as the scheme develops.”

South Tottenham station will get a major upgrade if the Crossrail 2 plan goes ahead, with a direct entrance to the new subterranean platforms for fast trains into central London and beyond.

Once built, the proposed train service would provide a Crossrail 2 train every 4 minutes (or 15 trains an hour). Each train has the capacity to carry 1,500 passengers, being over 200m long (two full-sized football pitches) and can travel at up to 140 km/h (90 mph).

Crossrail 2 is still on the drawing boards at the moment, but the case for this north-south rail link gets stronger every day. It is vital to provide improved public transport in London. As the Evening Standard commented “the case for extra spending on Crossrail 2 is … now unanswerable”

The current proposals reveal plans to:

The current plans include absorbing the (newly opened) South Tottenham entrance into a work site (“Site C”). Local residents and others will need reassurances on South Tottenham Overground remaining open during the estimated five to eight year building schedule. This is a popular and much used station, an essential part of the local transport system. For instance, could the previous entrance (on the north side of the bridge) be put back into action during this time, or is it now obstructed?

TfL have produced a guide to A typical Crossrail 2 station [PDF].

Meanwhile the Tottenham Hale branch of the Crossrail 2 would emerge from a tunnel near Markfield Park, crossing the existing Overground tracks. 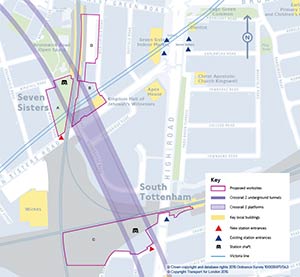 Passenger numbers have shot up again at South Tottenham, increasing by more than half year on year. Our petition calls for an upgrade to help cope.

END_OF_DOCUMENT_TOKEN_TO_BE_REPLACED

Changes are planned at South Tottenham station, which has seen a large increase in passengers over recent years. It is now the busiest intermediate station after Blackhorse Road on the Gospel Oak – Barking Overground line.

Plans under the “Access for all” scheme would see the introduction of lifts to platform level and the installation of automatic ticket barriers. This is a welcome continuation of TfL’s provision of step-free access, such as the new lifts at Gospel Oak station and .

The Barking – Gospel Oak Line User Group (BGOLUG) has raised concerns about the specifics of the current plan, and would like to hear the views of users of South Tottenham station.